The bright red tabasco pepper has been named after the Mexican state, Tabasco, from where it is believed to have been originated. It is widely known all over the world, mainly because of the popular branded tabasco sauce, which contains only natural ingredients including vinegar, salt, and tabasco pepper. Typical tabasco chilies have been rated at 30,000 to 50,000 Scoville heat units, which make them ideal for making sauces and adding to everyday dishes like salads and salsa. Tabascos are the only chili peppers in the world that contain juice unlike other peppers that are completely dry on the inside. They are about 2 inches long at full maturity and found in a tapered or pointed shape.

The peppers turn a beautiful bright red color when they mature. However, the fruits are pale yellow when they are quite young, then turn bright yellow after a few weeks, then orange, and finally bright red. In a typical tabasco plant, you will be able to see all these shades and it looks amazing. These peppers belong to the same family to which naga bhut jolokia belongs probably because of the pungency both these peppers have; however, naga jolokia peppers are much hotter and rarely used in cooking as compared to the tabascos. 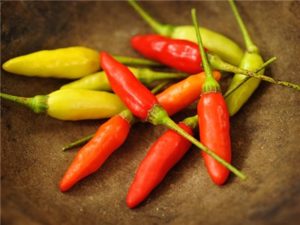 Many seasoned gardeners like to grow hot tabasco peppers at home. The unique thing about these peppers is that their fruits grow in an upward direction rather than handing down from the stems, unlike most chili peppers. The chilies thrive in summer season like most other peppers and require a full sun and regular watering to grow healthily. They are mostly grown with tomatoes and marigold as all these plants require almost the same growing conditions. Only buy seeds from a reputable store if you want 100% germination rate. The fruits mature in about 80 days from the day the seeds are planted. The plant grows to a maximum of 36 inches in height and is quite bushy. So, be prepared to use pepper cages for support.

The plant lasts for many years if it is kept away from frost. Tabasco chilies are therefore best produced in frost-free areas and where the summer season is the longest period of the year. The chilies can be preserved in a dried or canned form as well as frozen for future use. Typical tabasco pepper is easy to grow if the gardener is able to ensure favorable conditions. Pick the peppers only when they have fully matured and turned a bright red color. However, green and yellow peppers can also be used in cooking but they will not be as hot as the red ones.

When growing tabasco peppers in your garden, make sure you don’t over-fertilize them and remove the weeds as soon as they appear. Regularly water your peppers but don’t make the soil saturated. If you don’t want to use the peppers the same day they are picked, then leave them in your kitchen to ripen and increase in taste.

The peppers are commonly used in cooking by expert chefs to make homemade sauces, sandwiches, and salsa. If you browse through the official website of the branded tabasco sauce, you will find more than 1,000 recipes that use the paste or raw peppers in some form. These recipes include low fat and low carb foods, appetizers, soups, pizzas, burger and sandwich, and BBQ. Tabasco chili sandwich is one of the most favorite fast foods in the world. It can be prepared at home by using beans, tabasco paste, chili powder, beef, butter, onion, salt, and sugar. The paste of these peppers is widely used in almost all cuisines including Asian, Caribbean, Italian, French, Mexican, and Spanish.

Because of the heat and pungency, it is recommended to wear rubber gloves when handling these hot little chili peppers. Wash your hands thoroughly after working with them to avoid getting the heat into the eyes. When eating raw chilies, it is advised to drink milk or consume any other dairy product to get rid of the burning sensation in the mouth. The chilies can be dried in direct sunlight and then ground up for use in cooking. They are also available in powdered form for more refined use.

Remember tabasco peppers are hot, so use them sparingly in cooking especially if you are using raw chilies.

Tabasco chili sauce is one of the most widely used sauces in the whole world. The unique smoky taste of tabasco chilies is also characteristic of this popular sauce and because of which it is quite well-liked in almost all regions of the world. The sauce was first produced in the 19th century but today a lot of varieties can be found that contain extract of other chili peppers or natural ingredients like garlic or smoked peppers. It is red in color and measures up to 5,000 Scoville heat units. The original red sauce contains no food colorings or chemical preservatives and is therefore quite safe to consume even by those who are on a restricted diet.

Other hotter sauces are also available on the market containing spicier chilies like habaneros but this one is more popular because it can be easily tolerated by most people. The original branded tabasco sauce is more concentrated and has a richer taste than other pepper sauces available out there. Many commercial edible products contain this sauce as an ingredient, for example potato chips, ketchups, crackers, and pickles. The sauce can be stored for more than 3 years if kept in a dry place and favorable temperature.