This curious little chili pepper is commonly known as penis pepper because of its extraordinary shape. It is found in only two varieties: golden yellow Peter pepper and bright red Peter pepper. The origin of this unusual hot pepper is not known but it is grown in some areas of the American state of Texas as well as in Canada and Pakistan. The chili is also popular in Mexico where it is added to various spicy dishes including salsa. Some people think the pepper is too hot to handle and therefore avoid its use in cooking. However, for some people it is extremely naughty and utterly delicious. 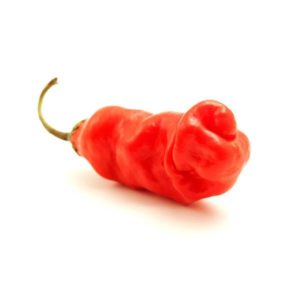 The penis pepper has a rating between 5,000 to 30,000 Scoville heat units, which make it around ten times hotter than a regular jalapeño. The mature pepper is about 3 to 4 inches long and a beautiful red color. These chilies are widely available commercially and their seeds are also easy to obtain. Those who wish to grow something unique yet highly palatable can try planting this unusual chili pepper in their garden.

Because of its high Scoville rating, the penis shaped chili is rarely used in cooking. However, those who like extremely hot dishes use it to make salads and salsa dishes. It is also commonly used in the pickled form and for garnishing purposes. In chopped form, it can be added to any dish to improve it in flavor and spice. Canned and sliced Peter peppers are also becoming popular with the passage of time. You can try replacing the regular peppers in standard recipes with these bad boys and see the results for yourself. For making a pickle, boil the chilies along with vinegar and salt and store them in sterilized containers.
Growing Penis Pepper

Growing these naughty peppers at home is not very difficult since the seeds are now widely available. Like all other pepper plants, the pots containing Peter pepper seedlings should be placed in a sunny spot. Maintain the pH level of the soil at around 6 or 6.5. Make sure you provide enough moisture to the pepper plants but don’t go overboard in doing so.
Interesting Facts

This penis shaped chili has had the honor of winning the award titled “The Most Pornographic Pepper” given by the Organic Garden Magazine.
The erotic Peter pepper is believed to ignite passion and increase a person’s sexual drive.
The pepper is not yet listed as a valid cultivar by most seed suppliers. It still has to strive for “official recognition”.
Although penis pepper is lower on the heat level than many popular chilies including the habanero and naga bhut jolokia, it is still considered “too hot to eat” by most people.
Chilli Willy is a company that makes and sells various interesting products based on this unusual chili pepper including seeds and planted pots.
Chili products by the above mentioned company are gaining in popularity with the passage of time particularly among enthusiastic gardeners who like to collect extraordinary plants.