Naga bhut jolokia is considered the hottest pepper in the world and is also known by many other interesting names in different countries like ghost pepper, red naga chilli, mystery chili, and simply bhut jolokia. It is mostly cultivated in India, Sri Lanka, and Bangladesh. The name bhut jolokia refers to “ghost chili” with bhut meaning ghost and jolokia meaning chili pepper in India. 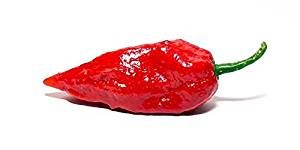 The pepper is recorded to be at approximately 1 million heat units on the Scoville scale. Previously, the habaneros were considered the hottest of all chili peppers rated at 100,000 to 400,000 heat units. But now hotter chilies have been recognized including the bhut jolokia and its sisters, such as naga viper pepper and infinity chilli. These peppers can be purchased in smoked pods or oven dried pods. The powders are a bit different in color and flavor due to different method used to process them.

This pepper has been called by the name ghost pepper probably because of its unique and ghost-like texture. It is mostly found in red variety but orange, yellow, and brown chilies are also quite popular. At maturity, they reach an average length of 2 to 3.5 inches. Fruits with smooth texture are also available that belong to a different variety of bhut jolokia. This chili pepper is also widely used in the making of pepper sprays for self defense. Moreover, they are used for making hand grenades and other types of non-lethal weapons to keep fanatics at bay.

Naga bhut seeds are planted indoors for the first few weeks before shifting them to larger pots and moving them outdoors. These chili peppers have the longest growing period as compared to other chilies in the world taking about 6 to 7 months to mature. Since these peppers are hard to grow, they are rarely found in other regions of the world except where they originated. The seeds require proper light but less heat to thrive. This hottest chili in the world also requires excellent soil conditions to reach the level of maturity without being affected by disease. A very warm climate, a perfect soil temperature, and ample lighting are some of the conditions required for successfully planting naga bhut jolokia peppers.

Considering the heat, many people might be doubtful about eating or cooking with naga bhut jolokia. However, despite its extreme hotness, this pepper is very much edible and is not poisonous at all. It can be used for making extremely hot sauces and for making utterly spicy dishes. Mostly, it is used in powdered form or by removing the seeds and the inner membrane to cool it up a bit. One must take precautions before eating it in the raw form because it can irritate the mouth and leave it burning for up to 30 minutes. After eating this ghost pepper, a person may sweat profoundly for a couple of hours. That is why it is commonly used in the summer to fight the intense heat particularly in India. The pepper is also known to have laxative effects and is therefore good for constipation.

Bhut jolokia peppers are found in many varieties including red, peach, chocolate, yellow, and caramel. Giant red ghost peppers have also been produced by some gardeners. The white and purple varieties, less common and hence less stable, are found very rarely and therefore not much information is available about their texture and heat units. Dorset naga, which is a variation on the regular naga bhut jolokia produced in Bangladesh, has been rated at over 1,500,000 Scoville heat units. This is the world record as no other chili pepper found in the entire world has come even closer to this rating! The ghost pepper made its entry into the Guinness Book of World Records in the year 2007.

Like other hot chili peppers, the ghost chili can burn your skin and harm your eyes. Some people have reported cases of burning sensation in the stomach after eating this chili that doesn’t go away even after several hours. It is therefore considered a dangerous chili because it may cause harm if not handled properly. Always wear rubber gloves when working with the chilies and even while planting the seeds. Fresh peppers are more intense than dried ones and therefore if you want to use these chilies in your dishes, it is advisable to dry them first. Bhut jolokia is best used in small quantities. When working with sauces made from ghost chilies, handle them with care because these processed foods can also cause harm if they come in contact with your skin.