Habanero, a variety of chili pepper belonging to Capsicum chinense species, is a variety of hot pepper with a long history to trace. It is one of the spiciest chili peppers in the whole world found naturally in white, brown, orange, and red varieties. Habanero pepper was originated in the Amazonas region and later on became popular in Mexico. The pepper attains a length of 2.5 inches maximum at full maturity and has a fruity citrus-like flavor and a sweet flowery fragrance.

Some people experience a burning taste after eating the habanero. This is due to the natural hotness of these chili peppers, they can burn your skin and inside of your mouth if taken in pure form. If this happens, avoid consuming water or juice. Instead drink a little milk or try some other dairy product to get rid of the burning sensation. 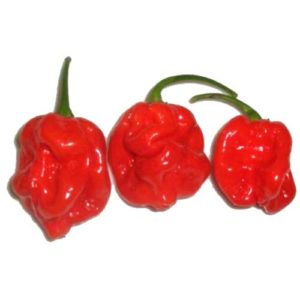 Sauces used in many dishes are made by adding a little habanero and these chili peppers are also used to add flavor to spicy cuisine throughout the world. Some varieties of this chili pepper are commonly known as white habanero, chocolate habanero, and red habanero. The chocolate habanero literally looks like a chocolate candy but is very hot in taste. The lovely lantern like shape makes it quite appealing. The white habanero is smaller in size with a squatted shape. It has a slightly smoky flavor unlike the traditional red habanero, which tastes like citrus fruit. The regular orange or red habanero is somewhat less hot than other varieties.

There are many types and varieties of habanero peppers, other than the ones mentioned above, with different shapes, colors, and heat level. Mild habaneros with little heat are rare to find but in regions where they are cultivated, they are quite popular. Black habanero chili peppers are very old, and some experts have found their seeds to be 7,000 years old. This type of habanero is very hot with Scoville rating much more than average. Black and chocolate habanero are names sometimes used interchangeably.

The traditional or regular habanero is often compared to the Scotch bonnet, also known as Caribbean red peppers, but Scotch bonnet is sweeter in taste. The shape and bright orange color make these two look like twin sisters but the habanero is definitely hotter. Both have different growing techniques and favorable climate for survival. Another hot chili pepper that the habanero is compared to is Aji dulce commonly found in Latin America and the Caribbean. Both have the same fruity aroma but Aji dulce is for those who find it difficult to handle the heat of regular habaneros.

The habanero seeds are cut out from the inside to prepare the pepper for use in cooking. The seeds are then used for cultivation or other purposes. These peppers are best cultivated in hot weather in soil with a pH level of more than 4. The plant rarely requires to be watered and is kept dry for the most time. That is why the habaneros thrive in hot and dry regions. In excellent growing conditions, the plant keeps producing flowers and fruit for many years. It grows to an average length of 3 to 4 feet. Take good care of your habanero plants as they can be affected by white flies and mites.

Habaneros can be stored at room temperature for 3 to 4 days without getting dry. They can also be grown in greenhouses and indoor plant settings with favorable conditions. If you take proper care of the plant, you will continue to enjoy the peppers for its entire lifetime. After you sow the seeds, you can take the peppers off within 90 days of their cultivation. It is recommended to pick the fruits often to prevent them from drying. Regular habaneros turn into a bright orange color when they mature. This is the best time to pick and store them.

On the Scoville Scale, the habaneros rate between 200,000 and 300,000. These are huge numbers as compared to other chili peppers found in the world. The more the Scoville rating of a pepper, the hotter it tastes. The chocolate habanero is a beautiful fruit with a vivid color and the hottest of all habanero varieties with Scoville rating averaging at 300,000. Black and brown habaneros, though hotter than other habaneros, take longer to grow to full maturity. A few years back, the habaneros were considered the hottest chili peppers in the whole wide world, but recently it has been found that the naga jolokia from India is even hotter rated at over one million Scoville units!

If you want to enjoy the taste of the pepper more than its heat, try the Venezuelen Sweet Chile Pepper, a popular ingredient in Venezuelen cuisine. Another sweet variety of the habanero is smells like perfume and has a citrus-like flavor. These rare varieties may not be available in your area, so check the favorable conditions required for their cultivation before growing them in your garden. To use regular habaneros, it is recommended to fry them in a little oil and then discarding them to avoid making the dish too hot to handle. When working with these peppers in the kitchen, always wear plastic or rubber gloves to protect your fingers. Habaneros and other similar hot chili peppers contain certain substances that can burn your skin.