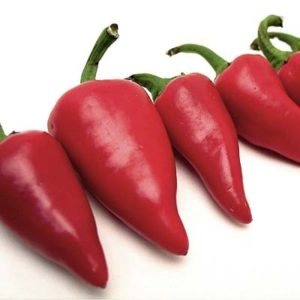 The Fresno pepper is similar to the jalapeño in shape and heat level but slightly redder when mature. This chili is about 2 inches long when mature and has thin walls. The chilies are widely grown in the American state of California. Fresno chili peppers are commonly used throughout the world for making delicious salsas and for adding to other foods to make them spicy. These peppers are not available commercially in powdered form and have to be used in fresh or dried form. Green Fresno pepper is also used in many dishes to improve their color and taste.

The chilies have a Scoville rating of 2,500 to 5,000 heat units when young like that of the jalapeño. However, mature Fresno chilies are much hotter and rate 5,000 to 10,000 heat units on the Scoville scale.

The Fresno is quite popular around the world because of its nutritional value and the presence of vitamin C in adequate amounts. It also contains many vital minerals as well as some B vitamins and is very good for boosting health. People use these chilies for reducing cholesterol level and for curing inflammatory conditions like arthritis. Since Fresno pepper is low in calories and fat, it is often added to a weight loss diet for effectively shedding some extra pounds.

The Fresno pepper can be used to reduce triglyceride levels and for preventing formation of blood clots throughout the body. Some recent studies have also revealed that the pepper is effective for preventing prostate cancer. The chili can be used as a pain killer if other remedies fail to give a cure.

In addition to being the main ingredient in a great salsa dish, this hot chili pepper can be used as a topping in burgers, pizzas, and sausages. Americans love this chili because of its mild to moderate heat and use it liberally in almost all their spicy dishes. The chilies can also be used in dishes that originally used the jalapeño or the Serrano pepper because of similarity in taste and heat level. The Fresno pepper can also be used to make moderately hot sauces at home. People consume the chilies for health benefits by stuffing them in cheese, potatoes, and seafood.

Cultivating these chilies in your home garden is an easy job and the seeds are also widely available throughout the US. It is recommended to sow the seeds anytime between mid February to mid July. Use a fungicide if you are worried about pests or fleas. Keep the pots indoors for the first few weeks but place them in a well-ventilated room with proper sunshine or a greenhouse. When the first few leaves start to appear, transfer the plants to large pots and place them in direct sunlight. Fertilize only after the first flowers appear. Pick the chilies when they have turned from green to red. You can also pick them when green if you want to experience less heat. The Fresno pepper takes about 90 days or three months to reach the level of maturity.