Chiltepin or chile tepin are “wild” chili peppers also known as bird peppers or bird’s eye peppers because they are mostly consumed by wild birds. These chilies are small and round in shape and usually found in orange-red varieties. Although the peppers are consumed by birds, they are extremely hot with a score of 50,000 to 100,000 Scoville units. Some people have also reported up to 250,000 heat units for this type of pepper. These ratings can be compared to that of the habanero pepper but huge variations in the heat level of these peppers have also been recorded and therefore nothing can be said with certainty. These chilies are also known as chiltepe in some regions. 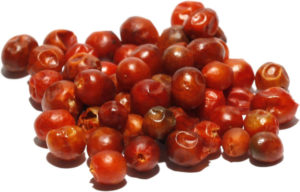 The peppers commonly grow in Mexico, Texas, and some parts of Arizona. Chiltepin is considered to be the oldest form of peppers in the Capsicum annuum species. Although the heat of the peppers is powerful, it lessens shortly after. Because of this reason, chiltepin can be effectively used in cooking and for making hot sauces and salsa. This chili is the only native chili to the United States and has also been named “the official native pepper of Texas” along with the jalapeno.

Since the chili grows in wild conditions, growing it at home or on farms has not been very successful. In fact, their cultivation has led to the development of another chili variety, known as chili pequin or piquin. This variety is even smaller in size but is less pungent and hot than the original chiltepin. People who have tried to grow these peppers in their garden have reported that they had to wait a long time before they could actually see the chilies. Common people cannot tell the two chilies apart and so both of these come under the category of bird peppers.

The peppers are used sun-dried in cooking and can be added to many foods to improve their flavor. Chiltepe hot sauce and salsa are quite popular all over the world. You can make your own homemade hot sauce by using this pepper. Some people also use the peppers in dried form to flavor their soups, stews, and salads. The pepper when young is green in color and these can also be used in cooking particularly for making salsas. The unique smoky flavor of chiltepin peppers makes them an excellent ingredient in many spicy dishes belonging to Asian and Mexican cuisine.

According to many Americans, this chili is quite good for overall health and well-being. It has been found to be effective for proper digestion and also cures many stomach disorders. Research data is available that confirms the antioxidant nature of this hot chili pepper as well as presence of many bioactive compounds in its composition. Since the pepper is grown organically, it is rich in natural substances good for our body. Chiltepin seeds are available in local plant shops as well as on the internet at stores like Amazon.