This beautiful small and heart-shaped chili, also known as bird cherry pepper and Creole cherry pepper, is similar in shape to the popular fruit cherry and hence the name cherry pepper. The chili is most commonly available in pickled form, which can be stored for long periods of time. It is also added to sandwiches and salads to make them mildly spicy. Chili lovers consume it in fresh form because of its less fiery nature than most chilies. These hot peppers turn an attractive bright red color on maturity. Green cherry pepper is also used for garnishing and other culinary purposes but is not as sweet as the red one. 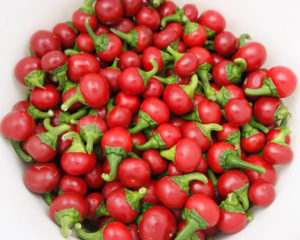 The pepper is sometimes labeled as Hungarian cherry pepper in stores because of their popularity in the Hungarian cuisine. The chilies are commonly used for garnishing or decorating salads and other dishes due to their lovely color and sweet taste. People also make deep-fried poppers with the help of these chilies coated with cheese or some other coating. Stuffed cherry peppers look very appealing. Those who are concerned about calories can slice the peppers in half and stuff them with cheese or mashed potatoes and then bake them instead of deep frying.

A Hungarian or Creole cherry pepper can be pickled at home by using a simple and easy procedure. You are going to need vinegar, mustard seeds, garlic, salt, and sugar for this recipe. First wash the peppers thoroughly, trim their stems, and then boil them for a couple of minutes. Mix all other ingredients and cook them for a while in hot water. First add the drained chilies to sterilized jars and then the remaining ingredients. Seal the jars and process them in boiling water once again before storage.

Pickled cherry pepper can be used to add flavor to any dish or simply consumed separately for a delicious and sour treat. The chili itself has a sweet and sour taste and pickling it with vinegar makes it even more sour and tasty. The peppers are widely available on the market, so even if you are not growing them at home you can still find the fresh ones out there. It is recommended to use unsealed pickled peppers within the first few weeks to avoid bad taste. However, sealed jars can be stored for more than a year depending on the freshness of the chilies when you pickled them.

Growing these lovely peppers at home is not very difficult since they do not require a lot of space and very strict growing conditions. However, like other chili peppers, they should be grown in summer season to see them mature before the frost. Also, make sure you place the pots in direct sunlight at least for 12 hours a day. Cross pollination is very common among all hot pepper varieties, so make sure to plant all your chilies separately to avoid accidental cross pollination. People usually hope to grow a mild cherry pepper and therefore they try to plant the hotter varieties somewhere else.